If you have questions or require information from the Music Library  please email: Info@chatfieldband.lib.mn.us.

If you’re interested in ordering music from the Music Library please email your music request to:  Musicrequests@chatfieldband.lib.mn.us

The Chatfield Music Lending Library is dedicated to keeping the spirit and tradition of band music alive in America and the World.

How did tiny Chatfield, Minn., become home to the world’s largest collection of brass band music?

Check it out at:  ClassicalMPR.org Article

BandTown USA . . . The City of Chatfield, established in 1853, has a long association with bands and performance. The first band was organized in 1883. In 1885 the Chatfield town council set up a tax appropriation to fund summer band concerts. The summer band concerts and the tax levy that supports them still exist today! 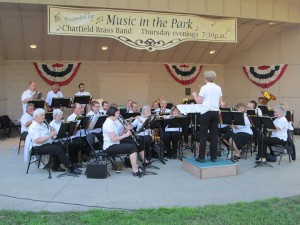 Somewhere along the way, the Chatfield Town Band dissolved but was revived again by Jim Perkins in 1969. Perkins gleaned the names of band members from old high school yearbooks and sent out invitations to the first rehearsal of the new Chatfield Brass Band. Sixteen people attended the first rehearsal, six of them playing tuba! Through Perkins’ tireless promotion, the band grew to nearly 50 members. 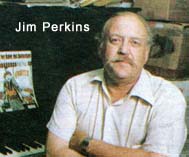 Word of Chatfield’s unique music reputation spread throughout the country. In 1973, the library and band incorporated and achieved tax exempt status. In 1983, the city’s post office received permission to use a special cancellation stamp reading “Bandtown USA, 125th Anniversary, 1853 -1978.” The post office also received about 40,000 13-cent stamps to commemorate the event. Governor Anderson proclaimed Chatfield “Bandtown USA” in 1978. The US Navy Band, Swiss Bands, and other international bands have performed in Chatfield.

One problem facing the band was the unavailability of sheet music. Not just any sheet music, but the hard to come by kind; the challenging pieces rarely played today. Perkins sent requests to high schools to send him their unneeded music. Thus began the Chatfield Brass Band Music Lending Library. Pieces came from all over the country–in boxes, thirty to sixty at a time. The music was first stored at Perkins’ home, and then at Chatfield City Hall. Music took over the storerooms, the men’s shower stalls and spilled out into the hallways.

Perkins eventually received money from the state legislature to build a 3000 square foot building on land he donated. Today inside the music library, stacks of filing cabinets contain thousands of catalogued pieces of music. Bands from as far away as Australia and Japan have borrowed from this valuable collection.

The majority of the financial support comes from memberships and donations. The library relies heavily on volunteers to process musical donations.